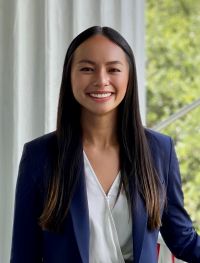 THUY DAN “MIMI” NGUYEN, Austin, Texas, was appointed as Student Regent for The University of Texas System Board of Regents by Governor Greg Abbott for a one-year term that began on June 1, 2021.

Ms. Nguyen is a student at The University of Texas at Austin School of Law. She grew up in Seguin, Texas where she attended elementary through high school. After graduation, she attended The University of Texas at Austin where she majored in Government, graduating with high honors, and earning her Business Foundations Certificate with highest distinction. During her time as an undergraduate, Ms. Nguyen was selected for the U. T. System Bill Archer Fellowship which allowed her to work full-time in Washington, D.C. while earning a semester’s worth of class credit. While in Washington, Ms. Nguyen interned for the United States Supreme Court. She also worked two legislative sessions during undergrad, for Texas Speaker of the House Joe Straus and Chairwoman Angie Chen Button, and interned at the Travis County District Attorney’s Office. On campus, Ms. Nguyen was a Supreme Court Justice for the Student Government and served as a Student Conduct Board Member. She has also served as a research assistant to two professors.

After graduating from The University of Texas at Austin, Ms. Nguyen was admitted into The University of Texas School of Law. On campus, Ms. Nguyen is involved with the Texas Law Review, where she serves on the executive board as a Notes Editor. She is also a Student Ambassador, working with the U. T. Law admissions office to help prospective students gain a better understanding of the school. Ms. Nguyen is also a part of the Asian Pacific American Law Student Association and the Women’s Law Caucus. She has participated in various pro bono clinics during her time at U. T. Law and will be joining the Entrepreneurship and Community Development Clinic this fall, counseling and representing entrepreneurs, nonprofit organizations, and community groups in Austin. She is working as a Summer Associate for the law firm Vinson & Elkins LLP in Houston, where she will be returning upon graduation.