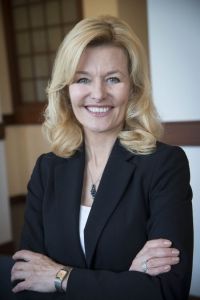 Laura Adams is the President and CEO of the Rhode Island Quality Institute (RIQI), a center of collaborative innovation that advances health and healthcare transformation.  RIQI was named a CMS Practice Transformation Network, one of only 29 in the nation.  She serves on the Rhode Island Governor’s Workgroup on Healthcare Innovation and is Massachusetts Attorney General Maura Healey’s appointment to the Oversight Council for the MA Center for Health Information and Analysis.

Laura served on the ONC’s HIT Policy Committee’s Governance Panel for the Nationwide Health Information Network.  She is a member of the Health Information Management and Systems Society (HIMSS) Center for Patient and Family Centered Care Advisory Group and chaired the Institute of Medicine’s (IOM) Planning Committee for the “Digital Infrastructure for Population Health and a Learning Healthcare System” workshop series.

Laura led the governance consulting for the Improving Performance in Practice (IPIP) Initiative, a RWJF-funded collaboration among the American Board of Medical Specialties, and the Boards and Societies of Internal Medicine, Family Physicians and Pediatrics.  She traveled in the U.S. and Europe with W. Edwards Deming in the study of statistical-based quality improvement.   She was Founder, President and CEO of Decision Support Systems, a New York-based company specializing in Internet-based healthcare decision support.

Laura has been a faculty member of the Institute for Healthcare Improvement (IHI) in Boston since its inception.  She directed the IHI Idealized Design of the Intensive Care Unit project and served as faculty in the VHA’s ICU improvement collaborative.  She was among the first to bring the principles of healthcare QI to the Middle East, in conjunction with Donald Berwick, MD and the Harvard Institute for Social and Economic Policy in the Middle East.  She served as IHI faculty at the inaugural IHI Middle East Forum on Quality Improvement in Healthcare in Doha, Qatar in 2013.

RIQI won the 2013 National Council for Community Behavioral Health Excellence Award for Impact in serving those with behavioral health and substance abuse challenges.  Laura has received citations from the RI Congressional delegation for her visionary leadership and contributions to improving the healthcare system in Rhode Island.  She received University of Northern Colorado’s Distinguished Alumni award and in 2014, RIQI was named RI’s Most Innovative Company in Healthcare by the Providence Business News.

He joined Banner (then Samaritan Health System) as senior vice president in 1995. His current responsibilities include care management and organizational performance for Banner including medical management, care coordination, case management and management engineering. He is also responsible for development of Banner Health's health management infrastructure, improving patient engagement, design of innovative care models and is accountable for clinically appropriate care.

Dr. Hensing practiced internal medicine in Tempe, Ariz. for 18 years and was awarded the Distinguished Internist of the Year Award in 1993. He is a Fellow in the American College of Physicians. He has served on multiple boards, including Samaritan Health System, The Samaritan Foundation, HealthPartners of Arizona, and Arizona Medicare Demonstration Project.

Dr. Hensing obtained his undergraduate degree at Iowa State University and his medical degree at the University of Iowa College of Medicine in 1972. After completing two years as a flight surgeon in the US Air Force, he completed his residency in medicine in 1977 and is board-certified in internal medicine. 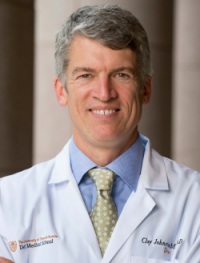 Since March 2014, Clay Johnston has served as the inaugural Dean of the Dell Medical School at The University of Texas at Austin. His ambitious vision includes building a world-class medical school by creating a vital, inclusive health ecosystem that supports new and innovative models of education and healthcare delivery – all with a focus on improving health and making Austin a model healthy city. He is also a neurologist, specializing in stroke care and research.

Previously, Clay was associate vice chancellor for research at the University of California, San Francisco. He also directed the Clinical and Translational Science Institute, overseeing the planning, development, and implementation of a $112-million, five-year, National Institutes of Health (NIH) grant award; and founded the UCSF Center for Healthcare Value to engage faculty and trainees in improving the quality of care while also lowering costs.

He is a graduate of Amherst College, and Harvard Medical School. He later received a PhD in epidemiology from the University of California, Berkeley, and was a resident in Neurology at UCSF, where he later trained in Vascular Neurology. During his 20 years at UCSF, he rose the academic ranks to Professor of Neurology and Epidemiology, and directed the Stroke Service.

Clay has authored more than 300 publications in scientific journals and has won several national awards for his research and teaching. In particular, he has published extensively in the prevention and treatment of stroke and transient ischemic attack. He is perhaps best known for his studies describing the short-term risk of stroke in patients with transient ischemic attack and identifying patients at greatest risk, and also for his work related to measuring the impact of research. He has led several large cohort studies of cerebrovascular disease and three international multicenter randomized trials, two of which are ongoing.