AUSTIN—Breakthroughs in medicine and technology at The University of Texas System have earned UT a spot among the world’s top universities that receive U.S. patents for inventions.

The UT System was ranked 4th among the Top 100 Worldwide Universities Granted U.S. Utility Patent Ranking for 2015. The ranking — published by the National Academy of Inventors and Intellectual Property Owners Association — uses data from the U.S. Patent and Trademark Office to highlight the important role patents play in advancing university research and innovation. It lists public and private research universities as well as university systems.

“The rate at which our universities are producing groundbreaking technologies is growing faster than ever, and it is an honor to recognize these institutions for their amazing work,” NAI President Paul R. Sanberg said.

In 2015, UT researchers from eight academic and six health institutions were granted 191 patents from the U.S. Patent and Trademark Office. UT patents have been on the rise in recent years, nearly doubling the amount of patents granted last year compared to 2009.

Teri J. Schultz, director of UT Arlington’s Office of Technology Management, said the UT System supports research at its institutions and places a high value on the intellectual property they produce.

“I’m proud to be a part of a university system that values intellectual property protection so highly,” Schultz said. “The ranking reflects the hard work put in every day by UT System researchers to create exciting new discoveries and by the technology transfer offices to evaluate, protect and license these discoveries to make them available to the public.”

“UT’s high caliber of research benefits our state, nation and the world with technologies that advance humanity and drive economies,” said Julie Goonewardene, UT System’s associate vice chancellor for innovation and strategic investment. “The UT System is committed to helping our researchers succeed by providing them with the key resources to take their patents from the lab to the marketplace.” 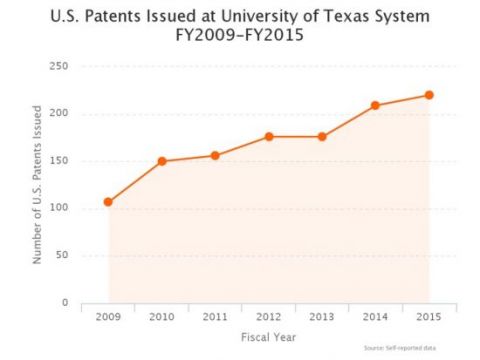 About The University of Texas System

Educating students, providing care for patients, conducting groundbreaking basic, applied and clinical research, and serving the needs of Texans and the nation for more than 130 years, The University of Texas System is one of the largest public university systems in the United States. With 14 institutions and an enrollment of more than 221,000, the UT System confers more than one-third of the state’s undergraduate degrees, educates almost two-thirds of the state’s health care professionals annually and accounts for almost 70 percent of all research funds awarded to public institutions in Texas. The UT System has an annual operating budget of $16.9 billion (FY 2016) including $3 billion in sponsored programs funded by federal, state, local and private sources. With more than 20,000 faculty – including Nobel laureates – and nearly 80,000 health care professionals, researchers, student advisors and support staff, the UT System is one of the largest employers in the state.