UT System Board of Regents bestows highest honor on Mike A. Myers

Dallas business and civic leader Mike A. Myers has been named a recipient of the Santa Rita Award, the highest honor presented by the UT System Board of Regents. The Regents unanimously voted to bestow the honor on Myers during a board meeting on Thursday, Nov. 15.

A successful real estate developer and banker, Myers has given generously and continuously of his service, expertise, and philanthropy to University of Texas institutions over the past six decades, including UT Austin, UT Southwestern, UT Dallas, UT Brownsville, UT El Paso, UT MD Anderson and UT Health Science Center Houston. 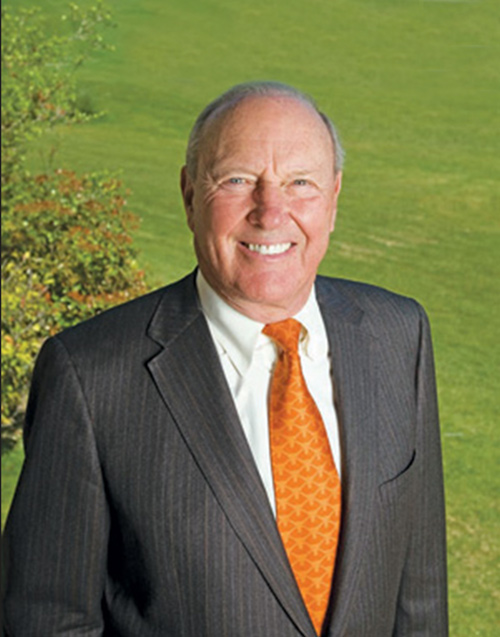 The Santa Rita award recognizes those who have demonstrated a commitment to furthering the purposes and objectives of the UT System and who serve as the highest example of selfless and public-spirited service. The award is reserved for an individual or organization whose contributions to the UT System and UT institutions have been exceptionally transformative.

Only 27 Santa Rita awards have been presented by Regents over the past 50 years. The award was first presented in 1968 and shares a name with Santa Rita No. 1, the first producing oil well on University Lands in West Texas. The well struck oil in 1923, jumpstarting the Permanent University Fund, a unique funding stream that has benefited UT & Texas A&M institutions ever since.

“Mike Myers has dedicated his entire life to improving lives and communities,” said Sara Martinez Tucker, chairman of the UT System Board of Regents.  “He serves quietly and is led by his heart, with no desire for recognition. The only gift he seeks in return is the joy of witnessing the success of those individuals and organizations he has supported. That speaks volumes about his character.

“Mike sees the good in everyone and everything,” she added. “My colleagues on the Board and I are honored to recognize him with the Santa Rita Award.”

“I am deeply moved and humbled by the Board of Regents’ desire to recognize my life-long involvement with UT institutions,” Mike Myers said.  “The Santa Rita award will certainly be among the most meaningful and special honors I have ever received – along with the countless friendships I have had the privilege of developing with students, faculty, staff and researchers who have enriched my life along the way.”

Myers, the owner and chairman of Myers Financial Corporation since 1969, is a graduate of UT Austin, where he earned both an undergraduate degree and a law degree – and established his business acumen. A native of Olney, Texas, Myers started three businesses to put himself through school as a UT student. Those businesses ranged from opening a catering service to selling Bibles.

Myers’ many contributions to UT Austin include establishing numerous endowments spanning the McCombs School of Business, the College of Education, the Moody College of Communication, the College of Liberal Arts, the College of Natural Sciences, the Office of the Provost, and several graduate studies programs. He provided core funding to intercollegiate athletics for the Mike A. Myers Soccer and Track Stadium and made significant contributions to other capital projects, including the expansion and modernization of Darrell K Royal – Texas Memorial Stadium.  He also partnered to develop the UT Golf Club in Austin, which provides intercollegiate golf facilities for students.

Myers is co-founder of the Foundation for Texas Excellence Scholars, and has served as president of the Texas Longhorn Education Foundation and chairman of the UT System Chancellor's Council. As trustee of the UT Law School Foundation, Myers helped create the Kay Bailey Hutchison Chair in Latin American Law.

“Mike Myers has served on every major board, commission and committee for UT Austin over the last 50 years,” Larry Temple, chairman of the LBJ Foundation and a longtime supporter of UT Austin, wrote in nominating Myers for the Santa Rita Award.  “He has been prolific, devoted, and impactful in his long-standing and continuing support for the UT System institutions.”

Myers has also contributed significantly to other public institutions, including Parkland Hospital and the Dallas County Community College District Foundation, and has held volunteer leadership positions in numerous organizations in the Dallas area, where he resides. He was also instrumental in creating the Texas Higher Education Coordinating Board.

He was recognized as the DFW 2017 “Entrepreneur of the Year” and was inducted into the Texas Business Hall of Fame in 2008. He is a member of UT Austin’s McCombs Business School Hall of Fame, a UT Austin Distinguished Alumnus and a recipient of UT Austin’s prestigious Presidential Citation award. Myers was also awarded the prestigious Charles Sprague Community Service Award from the UT Southwestern Medical School and has served as a trustee of the Southwest Medical Foundation.

“All of Mike's gifts and all of his service on commissions and advisory councils represent serious intellectual engagements with the goals and activities of the programs,” wrote Larry Faulkner, president emeritus of UT Austin, in his nomination of Myers. “His breadth of interest is very rare. It helps to make him an exceptionally valuable advisor for a chancellor, president, or dean, because he understands issues so comprehensively.”

Myers’ philanthropic and business interests are many and varied, but he always been particularly dedicated to helping young students throughout the state of Texas, wrote James Huffines, former chairman of the UT System Board of Regents, in his nomination.

“Mike has received numerous honors from around the state, but I can think of no other recognition that would mean more to him than to receive the Santa Rita Award,” Huffines wrote. “The Santa Rita Award was established to honor individuals like Mike Myers.”

Myers will receive the Santa Rita Award at a Dec. 12 ceremony in Dallas.

About The University of Texas System
For more than 130 years, The University of Texas System has been committed to improving the lives of Texans and people all over the world through education, research and health care. With 14 institutions, an enrollment of more than 235,000 students and an operating budget of $19.5 billion (FY 2019), the UT System is one of the largest public university systems in the United States. UT institutions produce nearly 59,000 graduates annually and award more than one-third of the state’s undergraduate degrees and almost two-thirds of its health professional degrees. Collectively, UT-owned and affiliated hospitals and clinics accounted for more than 7.8 million outpatient visits and 1.6 million hospital days last year. Across UT institutions, research and development expenditures total $2.7 billion – the second highest among U.S. public higher education systems – and the UT System is regularly ranked among the top 10 most innovative universities in the world. The UT System also is one of the largest employers in Texas, with more than 21,000 faculty – including Nobel laureates and members of the National Academies – and nearly 85,000 health care professionals, researchers, student advisors and support staff.