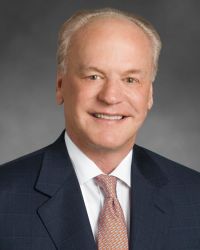 R. STEVEN “STEVE” HICKS, Austin, Texas, was appointed to a term on The University of Texas System Board of Regents by Governor Rick Perry in February 2009 and he was reappointed in 2010. Governor Greg Abbott reappointed him to an additional six-year term in January 2015 and to a two-year term in April 2021.

In 2017, Regent Hicks made a generous donation to the School of Social Work at U. T. Austin, and it was renamed Steve Hicks School of Social Work.  The school is one of the top 10 graduate programs of social work in the country.  In 2018, he was awarded the Distinguished Alumni award by the Texas Exes.

He owns and serves as Executive Chairman of Capstar Partners, LLC, formed in June 2000. Capstar is a private investment firm based in Austin, Texas. Capstar Partners participates in small and middle market buyouts, real estate development, and public investing. Since 2000, Capstar has invested in a broad range of industries including media and broadcasting, healthcare services, e-commerce, financial services and real estate.

Mr. Hicks serves on numerous charitable and professional boards. He and his wife Shannon reside in Austin, Texas, and have 6 children and 11 grandchildren between them.