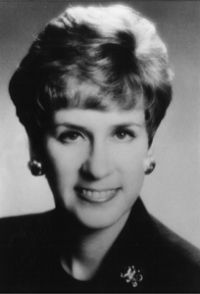 Linnet F. Deily of Houston was appointed to a six-year term on the Board of Regents of The University of Texas System by Governor George W. Bush in February 1995.

Ms. Deily, one of the five most senior women in American banking and one of the top 50 women in business in the United States, according to Business Week, was formerly the chairman, president and chief executive officer of First Interstate Bank of Texas. Additionally, she had responsibility for management of First Interstate Bancorp's branches throughout the western United States, as well as for its system-wide personal trust and private banking business.

She also chaired First Interstate Bancorp's Retail Council, which planned and implemented corporation-wide strategy for consumer banking. She served on the corporation's executive operating committee, which established corporate policy and strategy, and she directed the company's governmental relations.

Excerpt from The McCombs School of Business Magazine, Fall/Winter 2002

Growing up in rural Texas in post-World War II, girls of Linnet Deily’s generation had a defined dream that seldom strayed beyond marriage and a baby carriage. But the current U.S. Ambassador to the World Trade Organization, former member of the UT Board of Regents, and recognized banking and brokerage executive early in life had a love of history, travel and reading that would carry her far in what was then considered by many a man’s domain.

Deily was born on a 250-acre farm in rural Collin County, just north of Dallas. The Frazier family homestead, called Heritage Farm, was where her schoolteacher parents, Harold and Ruth Frazier, grew wheat, corn, and cotton, on land that has been in the family’s possession since 1857.

Coming to the University in the mid-1960s, during the height of the counter-cultural revolution, Deily vividly recalls experiences vastly different from her years in rural farm country. “There was an amazing diversity on campus—different nationalities, religions, political views, cultures and perspectives. The exposure to new thoughts and ideas was very exciting,” she recalls four decades later.

Long before Deily received a Bachelor of Arts in Government in 1967 from UT-Austin and a Master of Arts in International Management from UT-Dallas in 1976, she was convinced that she would be involved in the international sphere. “I used to enjoy just walking across campus and observing all the differences,” said the government major whose courses focused almost exclusively on  international topics. She also minored in International Studies, an inter-disciplinary program.

As a government major, she recalls professors “who inspired us to dig in and really learn and think.” Among her fellow government majors was Lynda Bird Johnson, and Deily remembers sharing a class (with Johnson) on The American Presidency. “I can remember thinking how difficult it must be to hear your own father discussed in class.”

Not surprisingly, the future ambassador and businesswoman also became involved with the Model United Nations. “I sometimes now tell people that I prepared 35 years ago for the role I now have, but then did something else for the intervening 35 years!”

That “something else” involved serving as Chairman, President and CEO of First Interstate Bank of Texas and managing all of the retail business of First Interstate Bancorp throughout their eleven state network. At Schwab she first led the investment management business of the firm; later was named President of Schwab Retail, responsible for all the Schwab branches, call centers, and Internet trading; and finally served as Vice Chairman of the firm.

Deily was appointed by then-Gov. George Bush to a six-year term on the Board of Regents in 1995. When her bank was acquired in 1996, she resigned to take a key management role with Charles Schwab Corp. in San Francisco.

She notes that when returning to campus, whether as a Regent or on recruiting trips or for speaking engagements, “I recall some of my fondest memories. I have been fortunate in many of my life experiences, and my time at UT was among the best—coming back to campus reminds me of those good times. I’ve come back regularly for football games, and singing ‘The Eyes of Texas’ is always good for the spirit.”

Excerpt from Office of the United States Trade Organization website

WASHINGTON - U.S. Trade Representative Rob Portman today thanked Ambassador Linnet Deily for her four years of outstanding service as the U.S. Representative to the World Trade Organization (WTO), and announced that he will transfer Deputy USTR Peter Allgeier to Geneva to replace her. Ambassador Deily is returning to her home in Houston, Texas on June 15th. Ambassador Allgeier is expected to take up the post permanently in the Fall, but in the meantime will divide his time between Geneva and his current responsibilities in Washington until his successor is in place.

"Ambassador Deily has done a superlative job in representing the United States at the WTO. Because of her efforts, the United States is recognized for its leadership in launching the Doha Round of multilateral trade negotiations in November 2001, in advancing the Doha negotiations, and in strengthening the system of international trading rules and the WTO institution itself," said Ambassador Portman. "On behalf of President Bush, myself, and my predecessor, Robert Zoellick, I want to thank Ambassador Deily for her pragmatic, constructive approach to problem solving, her dignity and integrity as the U.S. representative, and her ability to work so effectively with the other 147 Members of the WTO. The citizens of the United States could not have had a better example of international leadership and cooperation than that provided by Ambassador Deily during her four years in Geneva. She will be missed, not only by all of us at USTR, but also by her colleagues among the other WTO ambassadors in Geneva. We wish the best of everything for her and her husband, Mike, as they return to Houston."

Excerpt retrieved on September 19, 2006 from the Office of the United States Trade Representative website at http://www.ustr.gov/Document_Library/Press_Releases/2005/June/Portman_Lauds_Deily_for_Service_as_US_Ambassador _to_WTO;_Announces_Allgeier_Will_Take_Up_Geneva_Post_printer.html

Mrs. Deily resigned on November 20, 1996 to accept a position out of state.