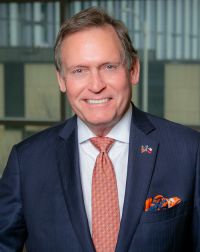 John M. Zerwas, M.D., joined The University of Texas System as Executive Vice Chancellor for Health Affairs in October 2019. He provides oversight and guidance for the five UT System health institutions, one of the largest networks of academic health institutions in the country with an aggregate annual FY23 operating budget of more than $17.4 billion.

On March 22, 2020, Governor Abbott appointed Dr. Zerwas to the newly created Supply Chain Strike Force to assist with hospital and health care preparedness relating to the COVID-19 pandemic. He also serves on the Governor’s Strike Force to Open Texas and the State's Expert Vaccine Allocation Panel.

Prior to joining U. T. System, he served the citizens of Texas House District 28 (Northwestern Fort Bend County) for seven legislative terms in the Texas House of Representatives. Zerwas served eleven years on the House Appropriations Committee, three as Chairman, and six as Chairman of the Appropriations Subcommittee on Health and Human Services. As the 2015-2016 Chairman of the House Committee on Higher Education, he advocated to increase access to higher education and grow opportunities for graduate medical education. He brought firsthand experience and knowledge of health care systems and policy to the House Committee on Public Health and also served as a member of the Legislative Budget Board. As a Representative, Zerwas earned numerous accolades for his dedication to public service, including being twice named one of the "Ten Best Legislators" by Texas Monthly, a Distinguished Alumnus by the University of Houston's College of Natural Sciences and Mathematics, and "BIO Legislator of the Year" by Biotechnology Industry Organization for writing critical legislation that preserves patient access to innovative and cost-effective biologic medicines in Texas. In 2019, he received the National Distinguished Advocacy Award from the American Cancer Society Action Network. Dr. Zerwas received the American Medical Association's Dr. Nathan Davis Award for Outstanding Government Service in 2020.

A physician for more than 30 years, Zerwas is past president of the American Society of Anesthesiologists. Zerwas cofounded a Houston area group practice in 1996 which became part of US Anesthesia Partners in 2012. He remained active in the practice and operations of the practice until joining the UT System.  From 2003 to 2008, Zerwas served as Chief Medical Officer of the Memorial Hermann Hospital System, and as Chief Physician Integration Officer until 2009.

Dr. Zerwas graduated from Bellaire High School in 1973, and in 1978, he married his late wife Cindy Hughes. After graduating from the University of Houston, he earned his Doctorate in Medicine at Baylor College of Medicine in 1980. John, together with his wife Sylvia, have six children and ten grandchildren: Isabella, Matthew, Dashel, Oliver, Beatrice, Tinley, Harlow, Posey, John McCall III, and Willa.