Infant Mortality in Communities Across Texas

PDF of the Report
Interactive Map
Public Use Data Files

The infant mortality rate (number of deaths before an infant’s first birthday per 1,000 births) is a leading health indicator that provides insight into the health of infants, mothers, and the larger community. Texas has been meeting the Healthy People 2020 target for infant mortality since 2012, and has an infant mortality rate lower than the national rate. Despite this relatively low state rate, there are substantial geographic differences within Texas that deserve special attention.

Knowing local-level health indicators such as infant mortality facilitates understanding community health needs, identifying health disparities, planning and targeting interventions, and assessing progress towards population health objectives. Identifying communities in our state with high rates of infant mortality can help focus resources to improve outcomes. There is also great value in identifying areas where the infant mortality rate is low so that the protective factors that exist in those communities can be understood. Identifying modifiable protective factors can help guide prevention efforts in other communities across Texas, and throughout the nation.

These zip code level data show that despite our state’s relatively low infant mortality rate, substantial variation exists across zip codes. Fifteen of the included zip codes did not experience a single infant death in this four-year time period, whereas 59 experienced more than one percent of their infants dying before their first birthday. 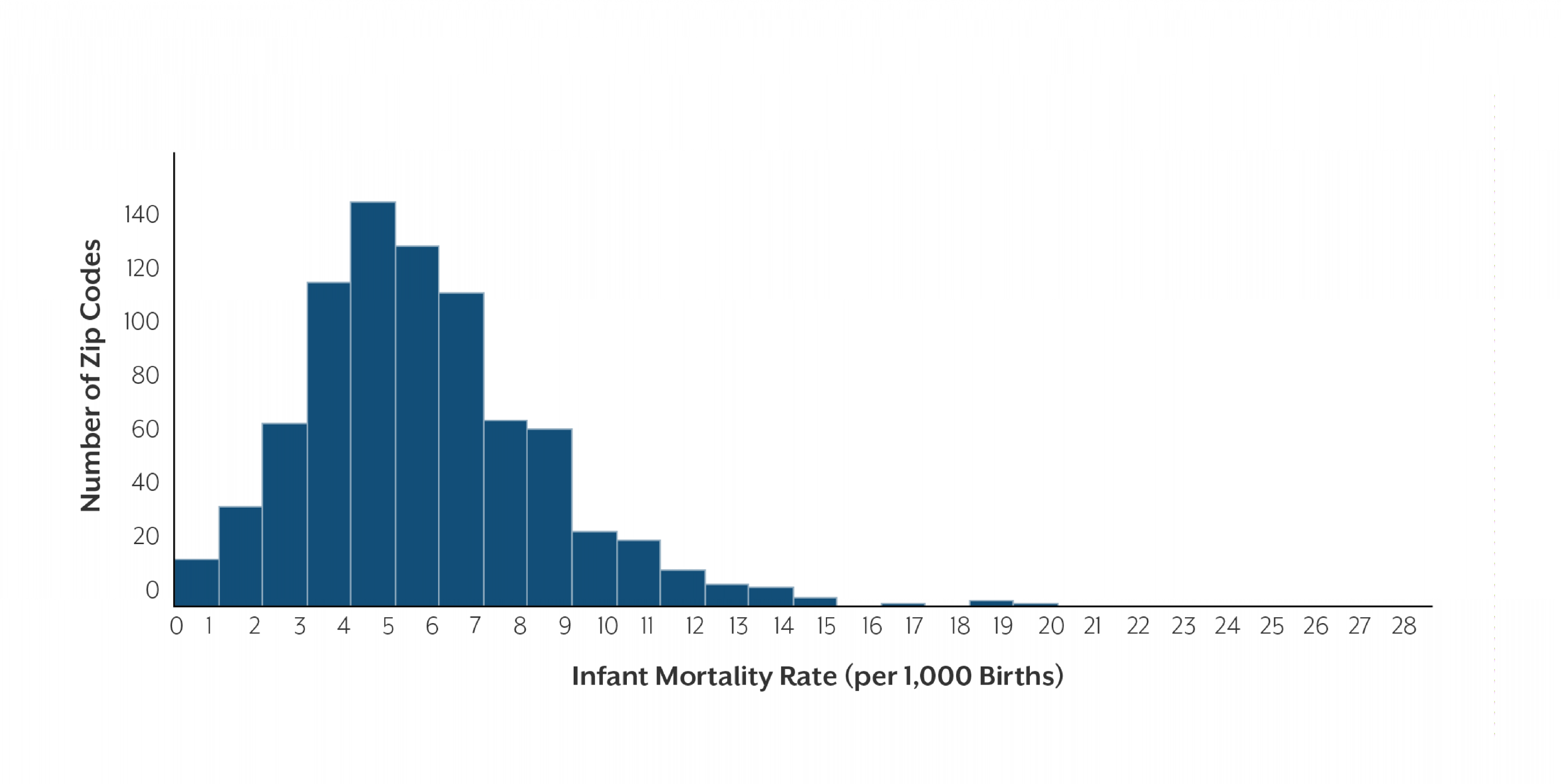 This variation also is seen within cities. For example, in Fort Worth, the infant mortality rate was more than six times higher in the 76164 zip code (12.3 deaths per 1,000 births) than in neighboring 76107 (1.8 deaths per 1,000 births). Fort Worth is not alone – there are stark zip-code level differences in infant mortality rates within many cities in Texas 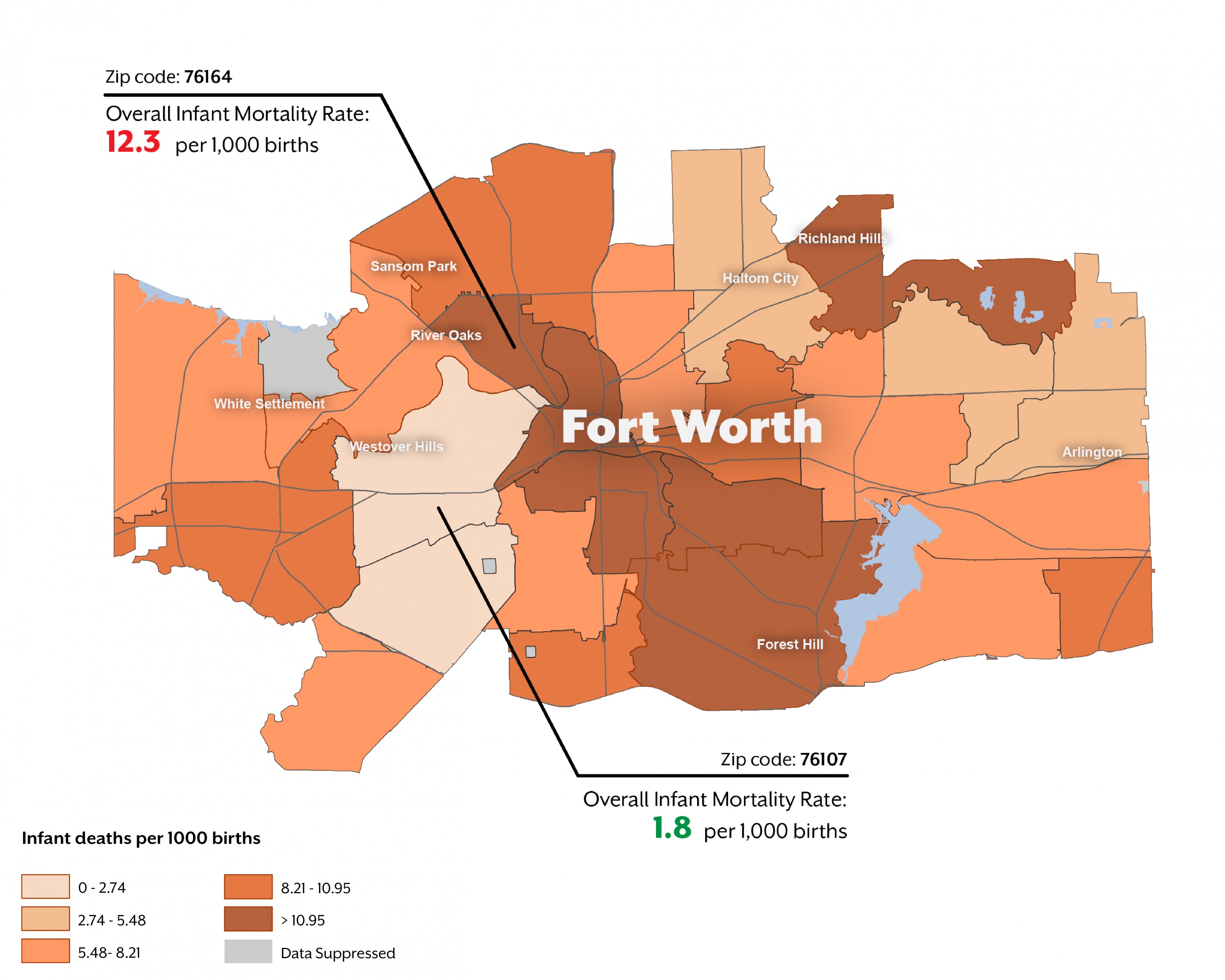 Zip code level infant mortality rates were also calculated based on maternal race/ethnicity for groups with more than 400 births in the zip code between 2011-2014. These data showed that there was also substantial geographic variation in rates within racial/ethnic groups (Figure 2). All racial/ethnic groups had zip codes with infant mortality rates at or near zero. All groups also had zip codes with rates greater than 10 deaths per 1,000 births. Babies born to Black mothers had the highest rates of infant mortality. They also, however, had the largest zip code level variation across the state. 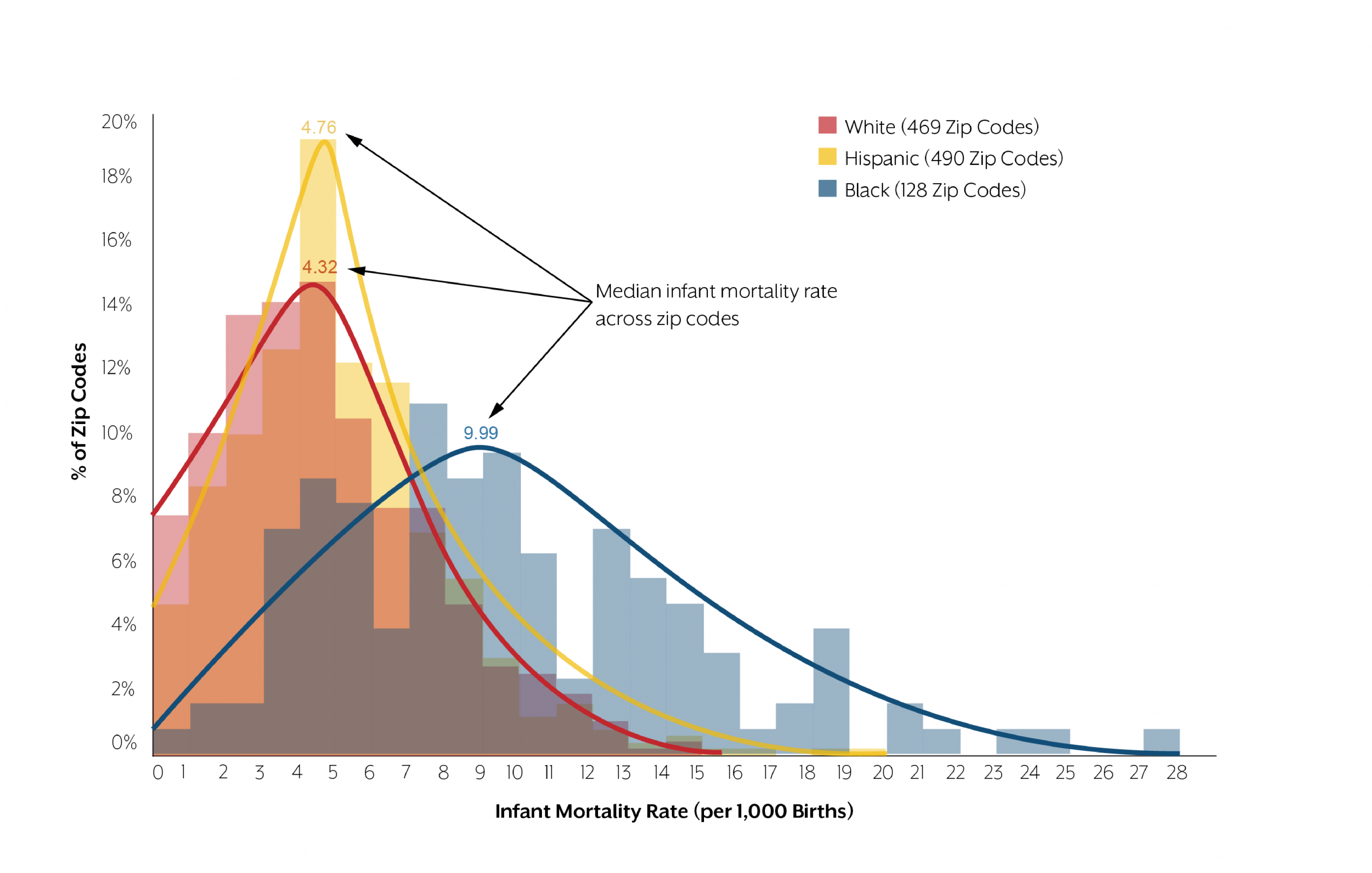 Mapping these rates reveals that the variation that is seen across the state is also seen within cities. Babies born to non-Hispanic white women in Texas have a relatively low risk of dying within the first year after birth, but this risk varies significantly within cities. The highest mortality rates for infants of white mothers were found outside the major metro areas.  For example, Longview had more than one zip code with a mortality rate for infants of white mothers that was more than double (11.4 and 12.3 deaths per 1,000 in zip codes 75647 and 75605, respectively) the overall infant mortality rate for the state. 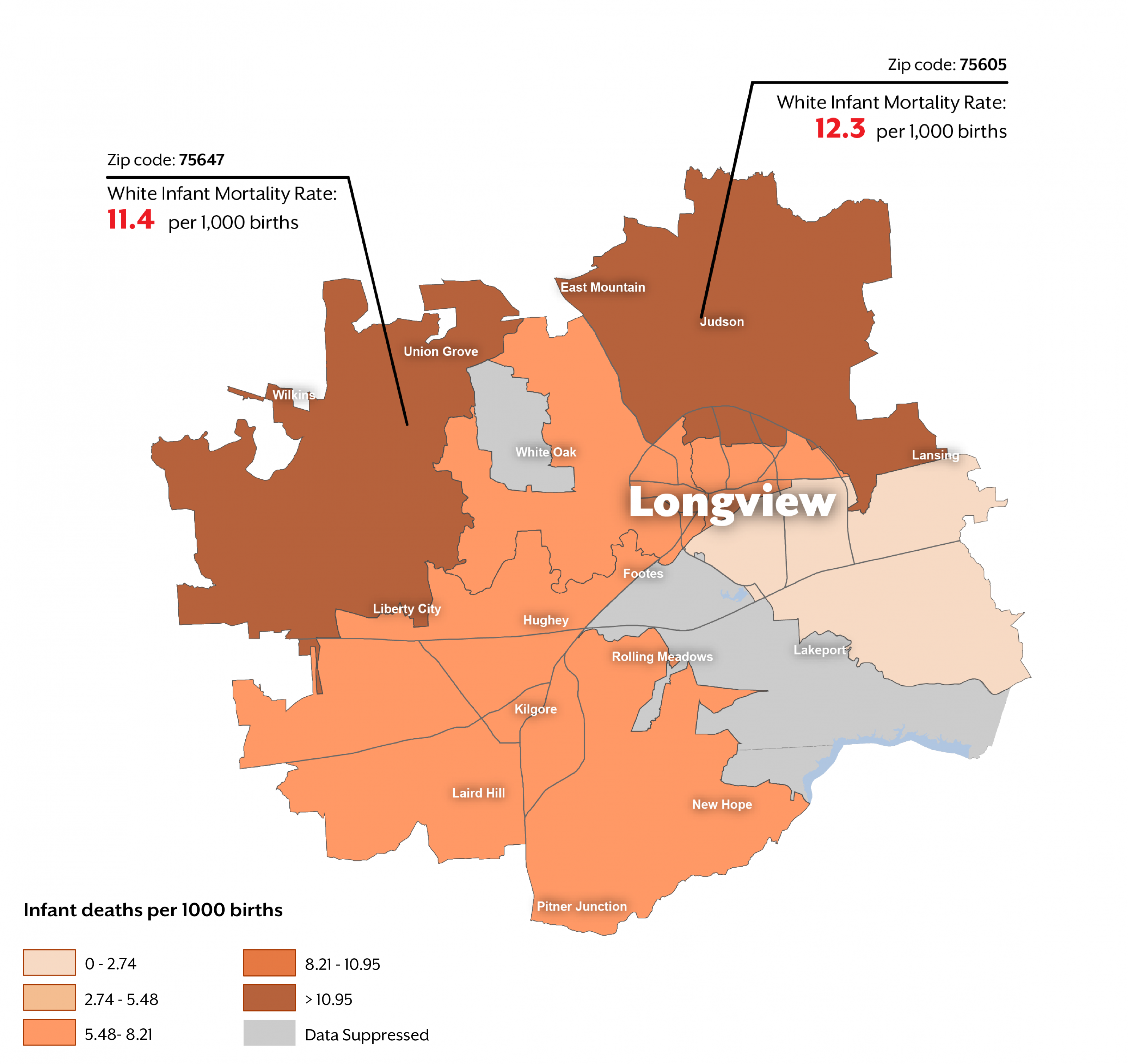 Babies born to Hispanic women have the lowest rate of infant mortality of the three major racial/ethnic groups in Texas. However, as for infants of white mothers, mortality rates for infants of Hispanic mothers varied greatly depending on where the mothers lived when they were pregnant. For example, in San Antonio, adjacent zip codes 78203 and 78220 had Hispanic infant mortality rates (16.0 and 11.6 deaths per 1,000 births, respectively) that were over double the overall state rate. 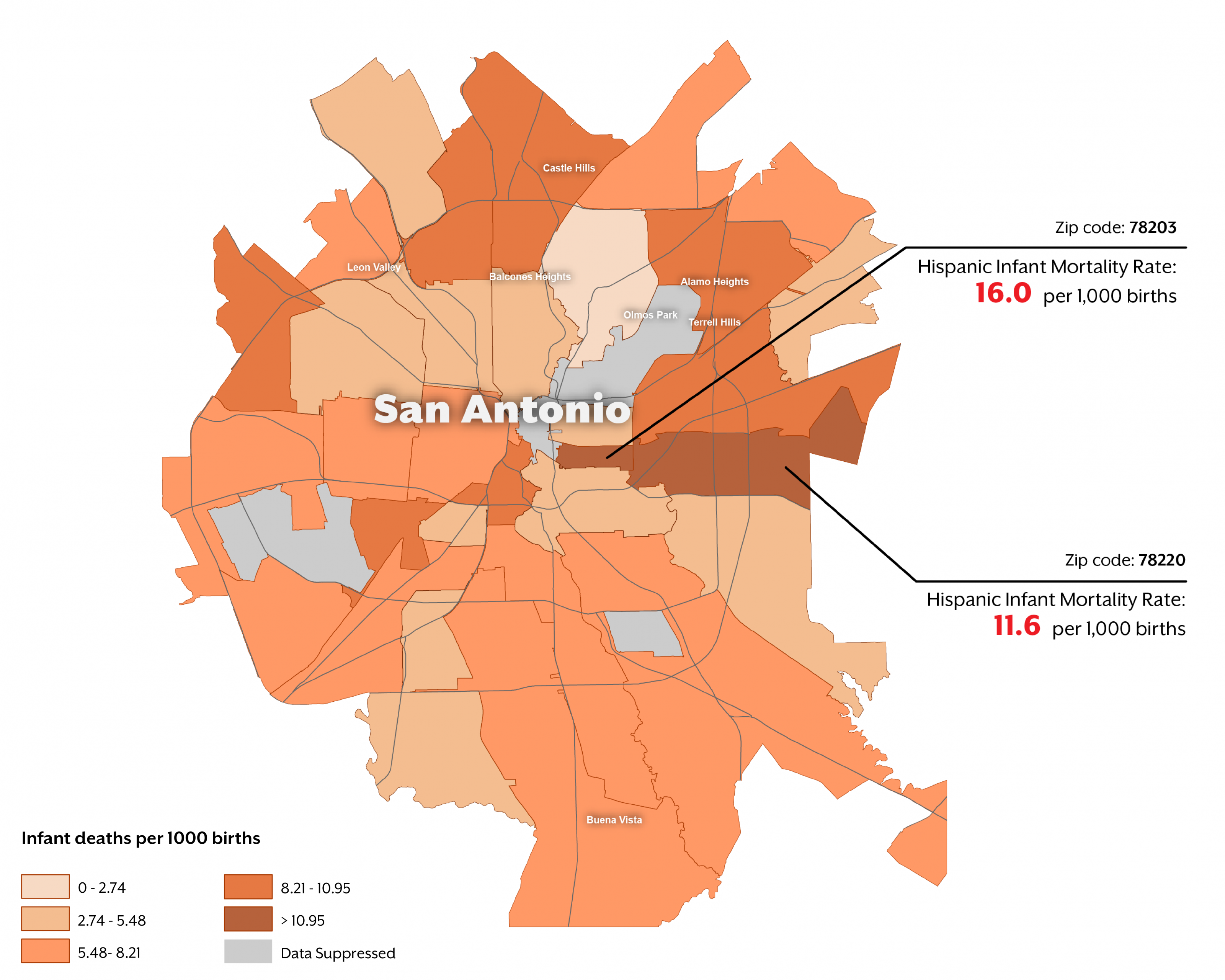 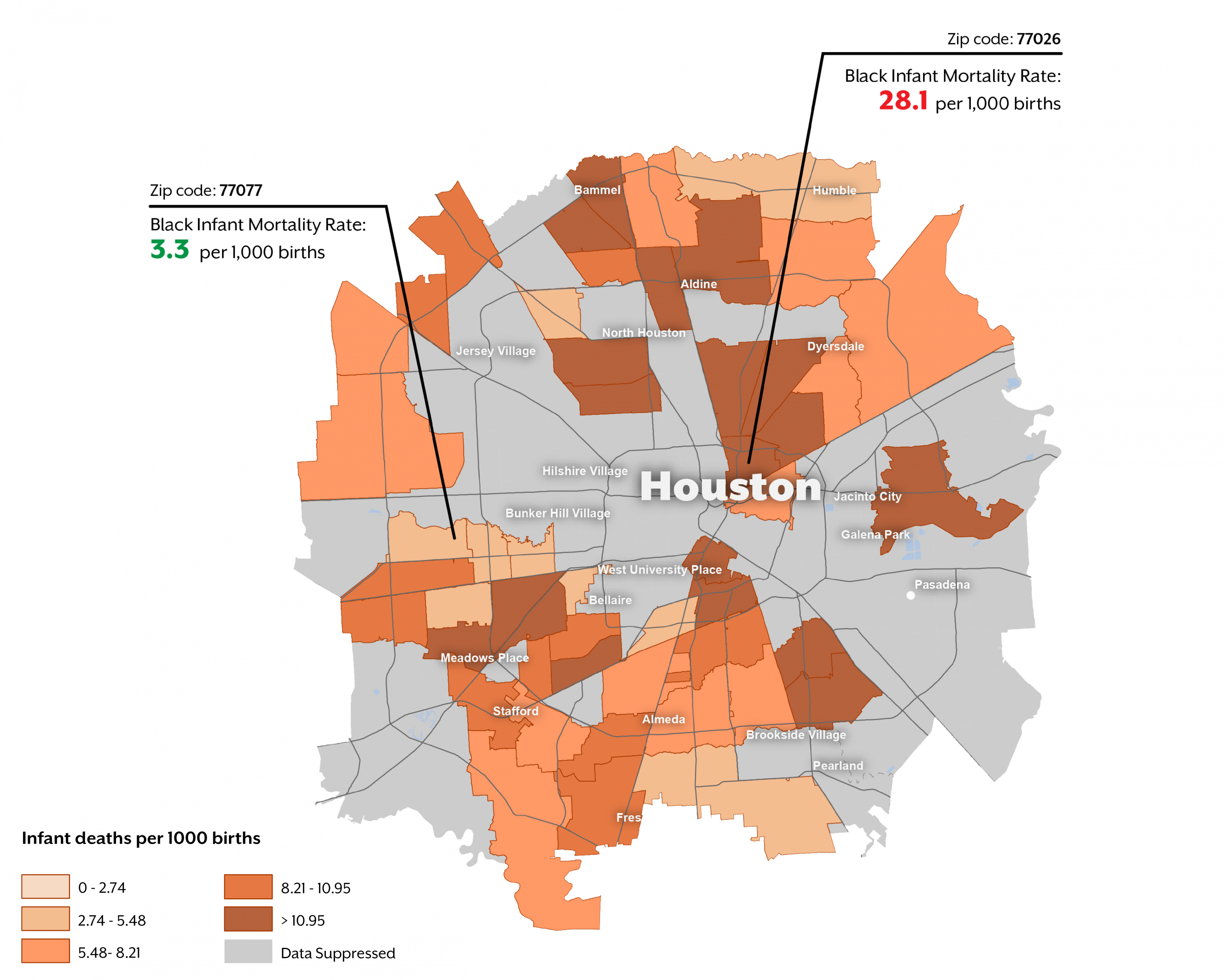 IMPLICATION AND NEXT STEPS

Texas has made positive progress in reducing infant mortality, with many important statewide initiatives working together to make these reductions possible. These data
document the wide geographic variation in the state and demonstrate substantial variation within racial/ethnic groups. Zip codes with both low and high rates of infant
mortality can be found for all groups. Thus, race/ethnicity cannot be the sole explanation for a community’s high or low rates.

There is substantial evidence that social, environmental, and economic factors at the community level partially explain this variation. Socio-economic status of the community, income inequality, and air pollution are three community-level factors that have been found to be related to infant mortality.2, 3 Expanding this existing research to understand how these factors are playing out across communities in Texas will be an important next step.

Researchers with Population Health in the Office of Health Affairs at UT System and UT Health Northeast will continue to work towards understanding why the variation in infant mortality rates across Texas exists and what can be done to reduce it. We also encourage other researchers to study the modifiable factors that explain why
this variation exists and, importantly, work towards finding solutions to improve the health and wellbeing of all mothers and infants in the state.