Access to high-quality and timely local data is critical to improving the health of communities, providing them with the information needed to make the best decisions. These data inform policies and resource allocations at the state and local level, and can help strengthen the design and evaluation of interventions to meet specific community needs. They are also the basis for community health needs assessments that shape local health improvement plans.

An important source of health-related data at the local level are birth and death records, which are  collected by the Texas Department of State Health Services (DSHS). Information included in birth records can be used to calculate maternal risk factors that impact the health of both mothers and their babies. These measures also offer a window into the health status of the entire community, as mothers are a subset of the larger population.

In order to increase the availability and accessibility of local data, UT System Population Health used the 2013-2015 Texas birth records to generate ZIP-code-level measures of three maternal risk factors: pre-pregnancy obesity, smoking during pregnancy, and prenatal care utilization. Each of the measures was calculated by year at the ZIP-code-level for ZIP codes with at least 100 births in that year. These measures were also calculated by racial/ethnic subpopulations for ZIP code areas with at least 100 births to mothers of that racial/ethnic group.

Data for all three years by race/ethnicity are provided in downloadable files, and 2015 data are presented in an interactive map on the UT System Population Health website. The pdf document provides summary descriptions of each measure for 2015, details on the data source, and definitions of each measure.

This project is the second of a series of local area data projects by UT System Population Health. The first project provided  ZIP-code-level infant mortality rates for 2011-2014 (available at utsystempophealth.org/imr-texas) We hope these data are a useful resource for public health practictioners and researchers working to improve the health and wellbeing of all mothers and infants in Texas.

One marker of a mother’s health as she becomes pregnant is her pre-pregnancy body mass index (BMI). A woman in the obese range of BMI when becoming pregnant is at an increased risk for a variety of maternal and fetal complications, including preeclampsia, gestational diabetes, congenital anomalies, and fetal death.

Figure 1 illustrates one example of local variation of pre-pregnancy morbid obesity prevalence. Within ZIP codes with at least 100 births to Hispanic mothers in 2015 in Bexar County, the percent of live births to Hispanic women who were classified as morbidly obese prior to becoming pregnant ranged from a low of 1.1% to a high of 9.3%. 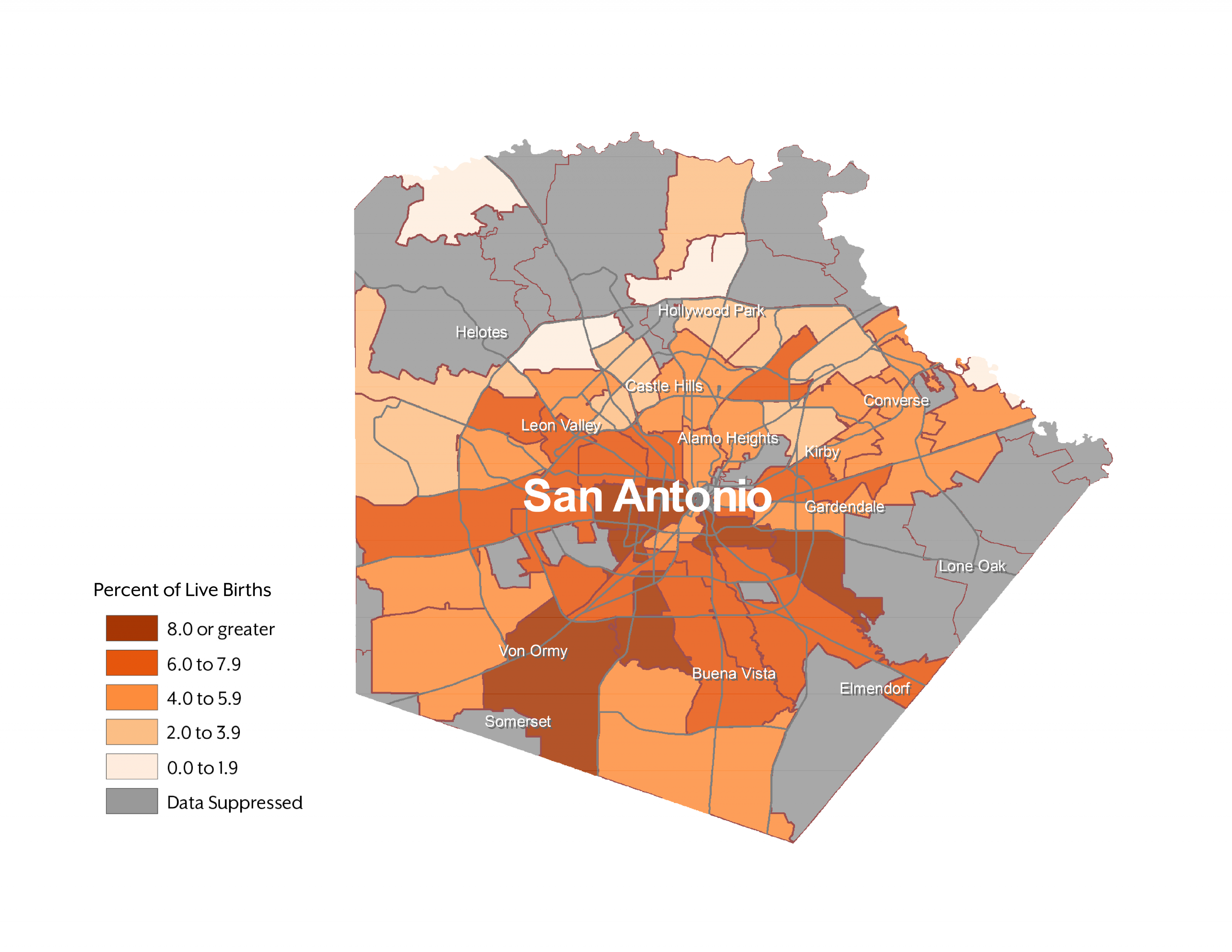 According to the National Center for Health Statistics, the percentage of women who smoked during pregnancy in Texas in 2016 was one of the lowest in the country.3 In 2015, over 30% of ZIP codes with at least 100 births met the Healthy People 2020 target of no more than 1.4% of pregnant women smoking during their pregnancy. An additional 48% of ZIP codes had a prevalence of smoking during pregnancy that was lower than the 2016 national prevalence of 7.2%.3 However, in 12% of the included ZIP codes, more than 10% of infants born were exposed to prenatal maternal smoking. 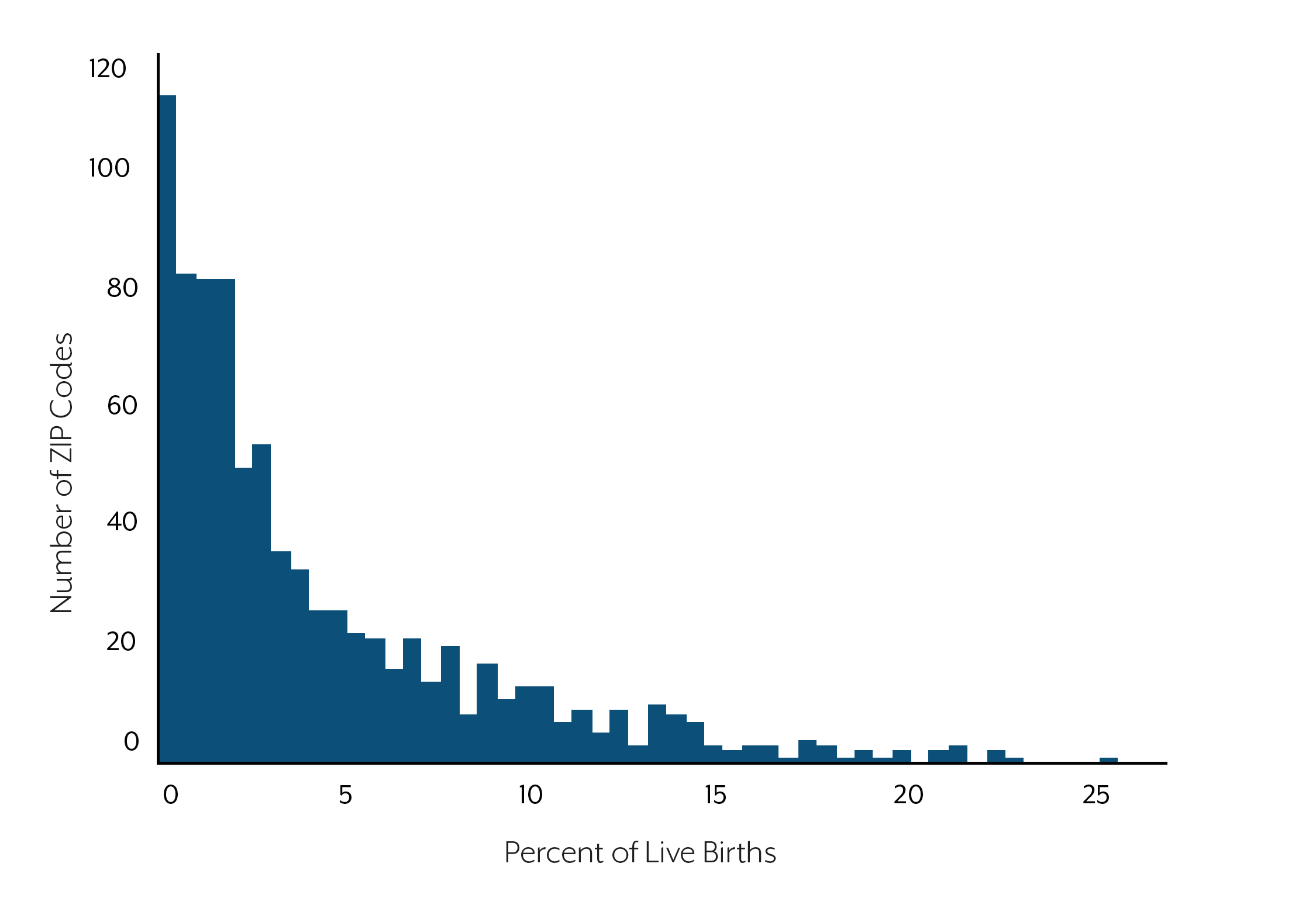 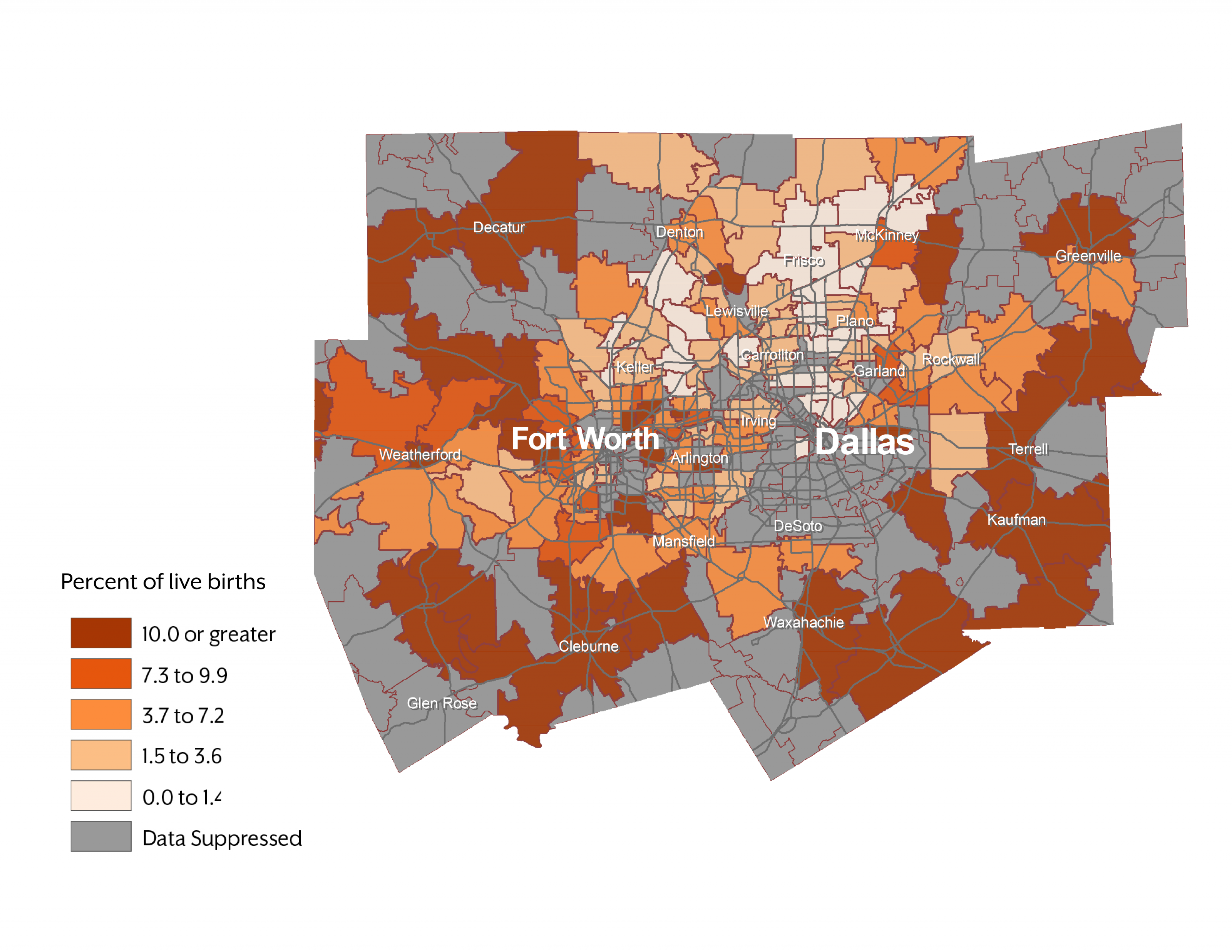 Prenatal care is important to the health of the mother and the baby. During these visits, women with chronic health conditions or complications during pregnancy can be medically managed to reduce the negative outcomes for the baby. Inadequate prenatal care utilization increases risk of prematurity, neonatal death, and infant death.¹ 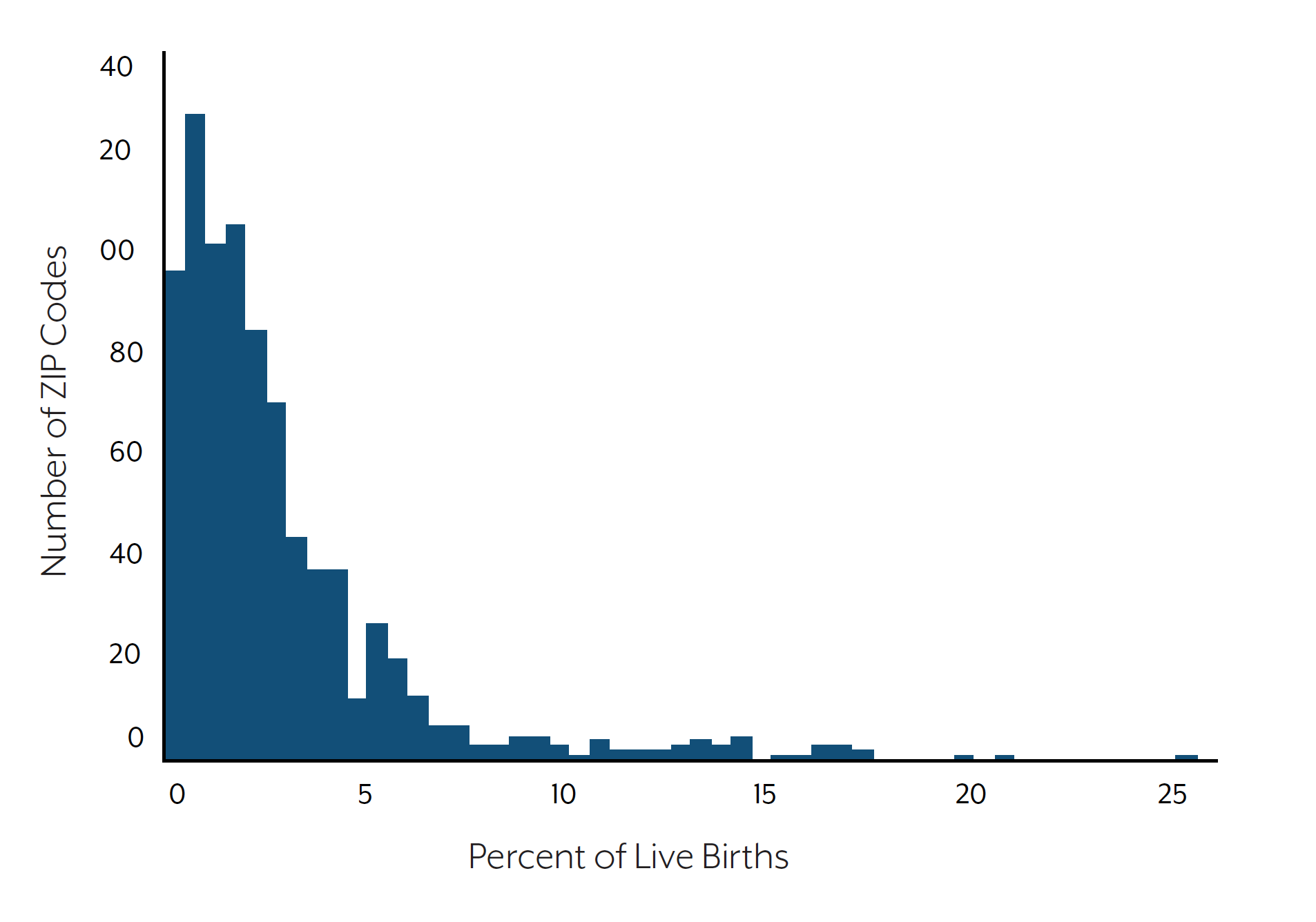 Figure3 illustrates one example of local variation in prenatal care utilization. Within ZIP codes with at least 100 births to black mothers in 2015 in Harris County, the percent of live births to black women with no reported prenatal care during their pregnancy ranged from a low of 0.0% to a high of 10.1%.

All measures were calculated using birth records provided by the Texas Department of State Health Services (DSHS). The dataset only includes live births that occurred in Texas to a woman who was a Texas resident. Live birth is defined as “the complete expulsion or extraction from its mother of a product of conception, irrespective of the duration of pregnancy, which, after such separation, breathes or shows any other evidence of life such as beating of the heart, pulsation of the umbilical cord, or definite movement of voluntary muscles, whether or not the umbilical cord has been cut or the placenta is attached; each product of such a birth is considered live born.”¹

Each measure is given as a percent of all live births during the specified year to mothers who resided in the ZIP code at the time of birth, excluding those with missing data for the specific measure. For measures by racial/ethnic subpopulations, only births to mothers of the specified racial/ethnic group are included in the denominator. Mother’s racial/ethnic category is categorized by DSHS, based on information on the birth certificate. In these categories, mothers with more than one race listed are included in the “other” category if they did not identify as Hispanic.

Any smoking during any trimester of pregnancy reported on birth certificate.

In order to protect confidentiality and reduce spurious data variability, rates were suppressed for geographic areas with fewer than 100 births in a given year. This suppression rule was also applied to all of the race/ethnicity calculations. Therefore, rates by race/ethnicity are only available for ZIP codes with a large number of women in that racial/ethnic category.

Standard errors and 95% confidence intervals were calculated using a Poisson mean and the normal approximation method. All rates that survive the suppression rule but have a relative standard error of the rate (RSE) of 30% or greater were flagged as unstable in the dataset and on the maps. Flagged rates should be interpreted with caution. 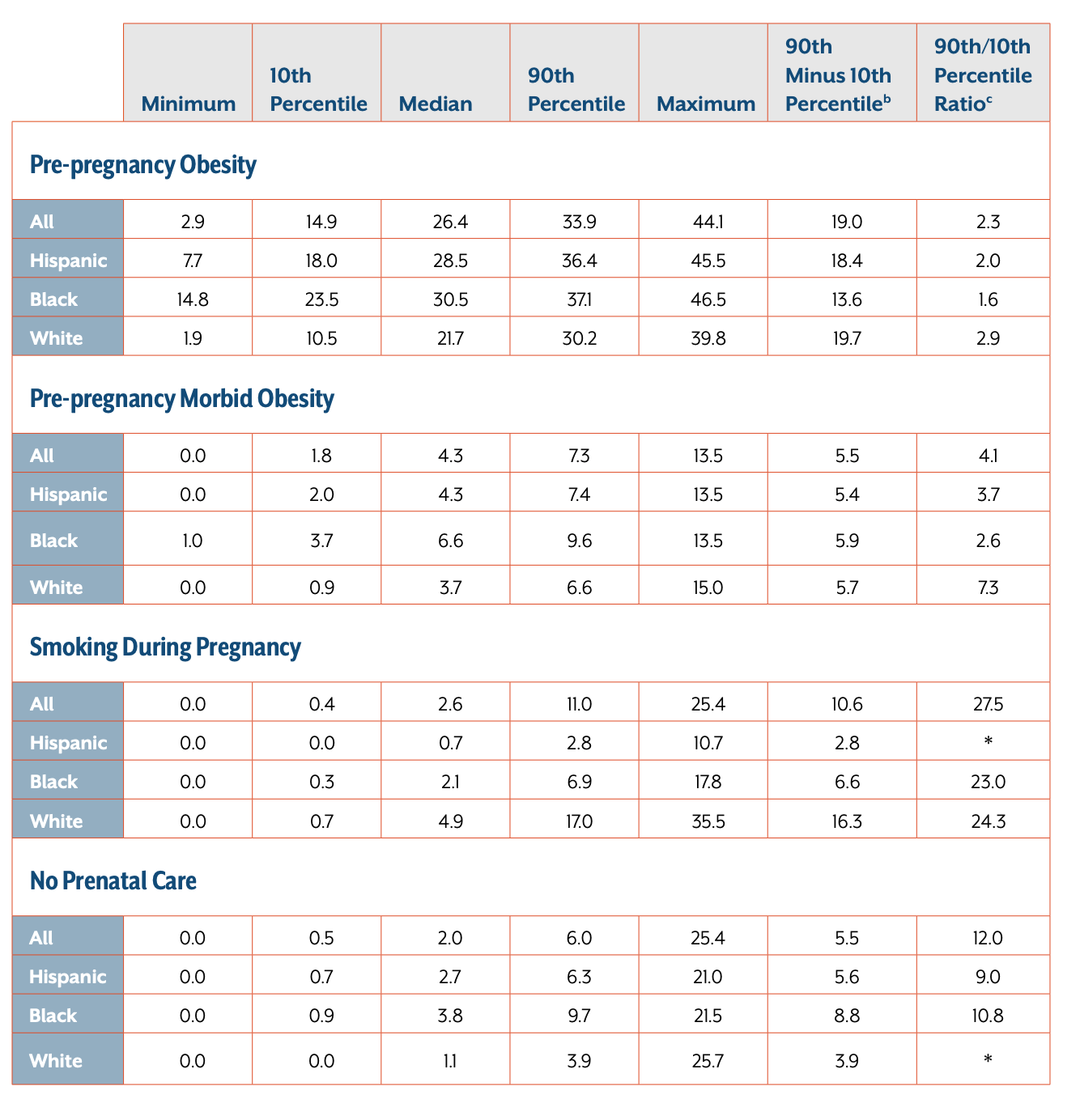 b Measure of absolute geographic inequality.

* Value cannot be calculated due to zero in denominator