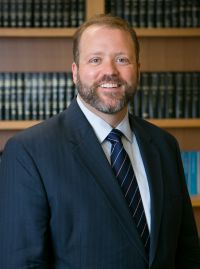 Sean graduated with High Honors and with the Order of the Coif distinction from the University of Texas at Austin School of Law in 2007. After clerking for a federal appellate judge, Sean joined a large litigation firm in Austin. He practiced trial and appellate litigation for over 4 years before he joined the Office of Attorney General. At the Attorney General’s office, Sean spent over 5 years representing universities and other state agencies in complex litigation.  He had a heavy docket of litigating and advising clients on Title IX/due-process matters. He has tried cases in federal and state court and argued at courts of appeals in both state and federal court. He is a former adjunct professor at UT Law and has represented both plaintiffs and defendants in high-profile litigation.

Sean is active in the Austin legal community.  He is a former member of the Lochridge Inns of Court and is the former Chair of the Austin Bar Association’s Civil Litigation Section.  Before law school, Sean was a Teach for America teacher in the Mississippi Delta and attended Grinnell College.